The Barth That Failed 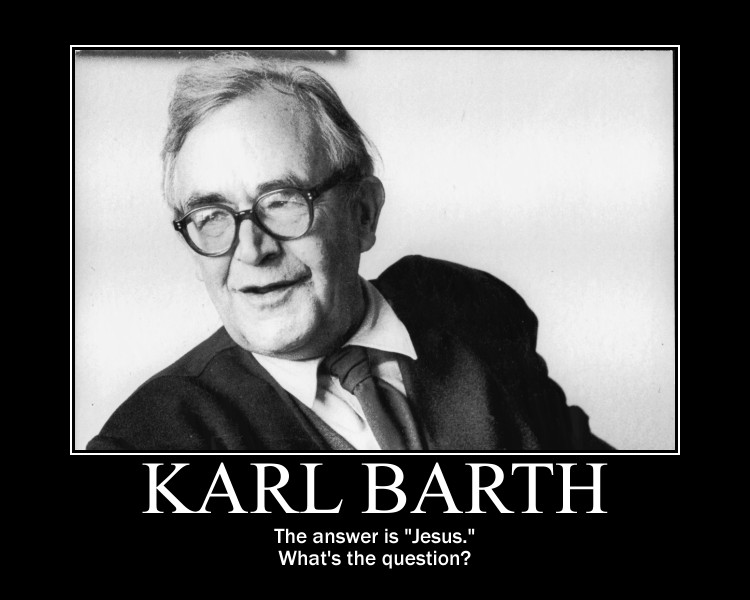 Matthew Rose's article in First Things on Karl Barth has been getting a bit of attention among the internet's theobloggers, and reading it, it's easy to understand why.  While damning him with faint praise, he opens by claiming that Barth's theology, which continues to demand the attention of Protestant (and many Catholic) theologians throughout the world a half century after his death, his a "dead letter." Rose makes a fairly sweeping argument that  Barth, in attempting to rescue Protestant theology from liberalism, ultimately failed to free himself and his theological project from the shackles of modernity. Quoth Rose:

By rejecting the speculative power of the intellect, Barth was drawn into making two mistakes. First, he turned his back on the metaphysics of classical theology, rendering almost unintelligible the conceptual idiom of the doctors and creeds of the Church. Barth did not hide this, and he worked hard to square his dogmatics with Christian tradition, replacing appeals to nature and causality with appeals to history and narrative, but the result was that he could not properly and consistently distinguish God’s nature from his actions in the history of salvation.

Barth’s second and deeper mistake was to sever the mind’s speculative relation to God. He dissolved the classical synthesis of faith and reason, collapsing all theological understanding into an exercise of faith. Unable to appeal to truth besides Jesus Christ, Barth was powerless to explain how truth could be known and communicated without supernatural assistance. He was even pressed to invoke divine revelation as proof of the existence of the external world, a sign something had gone very wrong.

His basic error is evident in his rejection of natural theology, which holds that careful observation of contingent beings can disclose the necessary being of God. This argument comes in several permutations, most of which are sketched by Thomas Aquinas, but its success in demonstrating God’s existence was arguably a secondary concern. The primary purpose of traditional natural theology was to show the indissoluble connection between the human intellect and a transcendent God who is Being itself.

Thus, Rose argues, Barth's fatal mistake was in doing theology in response to and in the context of modern philosophy, rather than retreat to an earlier form of theological speculation, Rose's "classical theology."

What Rose fails to note, as several of the commentators on his article point out, is that modernity itself was a response to the failure of that classical theological tradition to answer many of the perplexing epistemological and metaphysical problems that haunted theology throughout the middle ages. Descartes did not write his Meditations because he was looking for something to do on a slow day, but because he was attempting to answer the epistemological problem of how one arrives at certain knowledge in the face of the fact that our senses often deceive us. Rose writes as though that problem can be safely ignored simply by invoking the name Aquinas, but it can't.

What's more, as some of the commentators have noted, the assumption of modernity in Barth's theology is itself rooted in the reality that Barth is a protestant theologian. Modernity itself is a product of Protestantism, and, as David Congdon argues, can be seen as more faithful to the heart of Christian teaching than the kind of speculism that Rose endorses:

Here is my thesis: Barth’s rejection of natural theology is grounded in the theological conviction of the justification of the sinner by grace alone. This is not an especially novel claim, and I have made it elsewhere, but it is worth repeating. Barth is a Protestant, and as a Protestant he is convinced that God is the sovereign saving agent of the world. God justifies the ungodly and gives life to the dead sinner. Barth’s dialectical theology is based on the conviction that what holds for soteriology also necessarily holds for epistemology (and, later, for ontology). Why does he think that? The short answer is that he finds strong biblical support for the notion that to know God is to be in a right relationship with God; to know God is to be known by God (Gal 4.9). We can say more about that another time. If we apply this reformational soteriology to epistemology, we find that just as salvation is by grace alone, so too knowledge of God is by grace alone, by revelation alone, by God’s word alone. And this means that natural theology is denied from the outset on the grounds that it compromises the very nature of God.

Now this claim has some interesting implications, the most controversial of which would be that modernity is actually more faithful to the gospel than not. And indeed, that is precisely the claim I, along with others, want to make. Here I am drawing especially on the work of Gerhard Ebeling. I think there are two main ways in which modernity is itself theologically grounded. First, though, we need greater clarity about what modernity actually means, intellectually speaking. Rose defines it as the idea that human reason does not have speculative power to reach knowledge of God. But this is only a part of the picture.

Thus, Barth's theology does not fail by remaining rooted in modernity. Modernity is the presupposition out of his which theology necessarily developed, since it was intentionally answering questions rooted in the Protestant conception of Christian faith and its relationship to other spheres of human experience. The elusive nature of truth, as Congdon puts it, cannot itself be eluded simply by an assertion of the adequacy of speculative reason. On the contrary, speculative reason needs to justify itself in light of the critique offered by modern philosophy. And, as Kant demonstrated fairly devastatingly, it can't.

Barth did theology with the tools that he had at his disposal, as we all do. The particular tools that he had ready to hand were those of philosophical modernism. However, as Barth would insist, his theology was not dependant upon any particular philosophical school or set of presuppositions, but rather emerged from the revelation of God in Jesus Christ. This is a point made well by David Guretzki in his response to Rose:

Rose’s reading of Barth itself makes a fatal misstep: It assumes that all modern theological discourse necessarily starts from the assumption of an epistemological axiom and builds up from there. (And of course, that sounds very Cartesian, doesn’t it?). The problem is, Barth, in fact, does not proceed in this way at all–and never did. He does not start with a bedrock epistemological axiom from which all theological assertions stem, but rather deliberately refuses to build upon a philosophical prolegomena. In contradisitinction, Barth starts not with epistemology, but with the action of God in history as the “starting point” from which all theological knowledge comes. Even if Barth, as a modern, would accept that humans are incapax Dei, this is not to something known a priori but only a posteriori because God has revealed it to be so.

So in short, Rose’s reading of Barth tells us much more about Rose’s commitment than Barth’s. That is to say, Rose is apparently committed to the necessity of establishing a fundamental epistemological starting point for theology and that the particular starting point which he says Barth adopts is a starting point which Rose rejects. But in rejecting the incapax Dei principle, Rose necessarily commits to the opposite, capax Dei, which he calls the “classical synthesis of faith and reason” and thereby the fundamental epistemological starting point Christian theologians must assume in order not to fail. But does this not tell us much more about Rose’s epistemology and anthropology than Barth’s? And does not Rose’s essay falter because he fails to address Barth’s own explicitly stated starting point? Thus, in my mind, Rose’s essay could have been much more fruitful if he could have shown evidence why Barth’s commitment toDeus Dixit is ultimately the point at which Barth’s theology fails. But such an argument remains to be made.

Rose's ultimate critique of Barth then is that he is Protestant rather than Catholic, which is of course undeniably true. But that is not itself an objection to Barth as simply a description of the way in which Protestant and Catholic theology are different from one another. Of more interest, I think, is how Rose would respond to the critique leveled against "classical theology" by modernity. Based solely on his First Things article, the answer seems to be that he would prefer simply to ignore it. But that option is not open to him, particularly not if he wants to accuse theologians who choose to grapple with modernity of "failure."

The answer, I suspect, is not to be found in any form of Catholic theology that seeks to retreat to the theological synthesis of the Middle Ages, but rather in those that seek to bring that classical theological tradition forward into the present age, not by ignoring modernity, but by passing through it. Ultimately, and I'm fairly sure that this suggestion wouldn't be particularly palatable to Rose, the path has been laid for Catholic theology to do precisely this by Karl Rahner and others. Whether Rose chooses to walk that path, or whether he is content to simply snipe from the sidelines, is of course entirely up to him. But it seems strange that he would take as his target a theologian who is so thoroughly invulnerable to his own critique, while at the same time failing to subject his own theological presuppositions to the critique to which Barth is in many ways responding.

Posted at 09:00 AM in Academic, Philosophy, Religion, Theology | Permalink