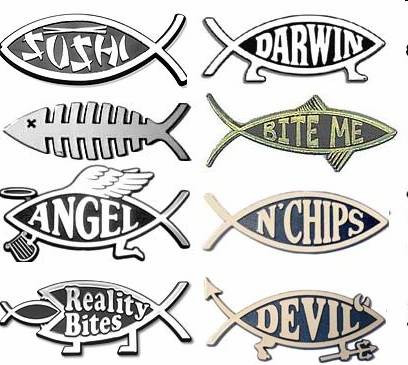 Thomas Wells makes an interesting argument at 3Quarksdaily that the core problem with neo-atheism is that it's not, in the end, atheist enough. Rather, it's so concerned with God that it replicates precisely the worst sins it disdains in religion.

This isn't a new argument by any means. Terry Eagleton made it powerfully and wittily in Reason, Faith, and Revolution, and that argument has been reiterated in many places, including this blog, but Wells makes a number of additional points that are worth noting.

First, on the subject of scientism, he writes:

I applaud the embrace of disenchantment: the universe is just stuff all the way down. But the new atheists are so keen to reject the ad hoc faith based reasoning of religionists that many of them go well beyond the implications of this common sensical metaphysical position to advance a bizarre epistemology in which our only way of knowing anything is the scientific method. That is, they insist on an account of rationalism borrowed from the idea of natural science that was in vogue back in the 1950s, an extreme version of logical positivism.

Perhaps this is just the kind of reactionary position one falls into, exhausted, after endless rounds of debating evolution with creationists. Nevertheless it is a very silly posture to end up in: a defensive crouch. Just because the natural sciences disprove many claims by religionists about how the world works doesn't mean that only the natural sciences can speak truth.

I've tried to make this point often, and with a great deal of frustration. Clearly, science can tell us much about the world, but there is also much about the world that is worth contemplating that science can't tell us much about. To make claims about those things -- issues of truth, beauty, happiness, and transcendence that are inaccessible to the scientific method proper -- is not to speak irrationally. It is in mistaking the boundaries of the rational with the boundaries of the scientific that neo-atheism has made one of its worst mistakes, one that should have been easily avoidable by at least one of its main adherents, Christopher Hitchens, who well knew that there were questions of life, love, and literature that couldn't be reduced to scientific equations.

The new atheists conflate religiousness with stupidity and stupidity with evil. Thus they seem to suppose that many or most religionists are theocrats anxious to impose their religious beliefs on the whole of society. Yet there are few real theocrats these days, reflecting the triumph of liberal democracy in the parts of the world where most new atheists live. This may be why several of the prominent authors in the movement seem so obsessed with Islamic fundamentalists, who mostly don't live in liberal democracies: they provide a convenient albeit misleading illustration of the danger to liberalism. ...

There is a basic misunderstanding here about what secularism and liberalism mean. Secularism is not the same as atheism. Secularism concerns restrictions on the role of divine beliefs in public life. Atheism concerns what individuals should believe about the divine. Secularism is a political movement compatible with both religion and atheism, and is rather a matter of style than content. It aims at a state of affairs where people don't push their beliefs about the divine on you or even at you, but keep them to themselves.

It follows that arguments for secularism can come from many places besides atheism. Historically they have often come from and been institutionalised by religionists, as in America. (As is also the case with other aspects of ethical progress associated with liberalism, such as abolition, gay marriage, women's reproductive rights, and so forth.)  From the perspective of liberalism the important issue is not whether someone has religious beliefs, but the extent to which they are reasonable in the way they hold them, that is, whether they abjure imposing their views on others. The militancy of the new atheist movement bears a worrying resemblance to the unreasonableness of the fundamentalist theocrats they worry about so much.

And here again, the insistance of neo-atheists that religion has no constructive and positive role to play in society, apart from being ahistorical and unnecessarily alienating to potential allies in the religious world, also suggests exactly the key issue that Wells is concerned with, namely the way that atheism becomes a religion unto itself, precisely because it is so concerned with what those religious people over there are doing. Wells, by contrast, takes what he deems to be the superior position: He just doesn't care that much about religion:

This new atheism isn't nearly godless enough for me. Its proponents seem somewhat obsessed with the quite unremarkable fact that God doesn't exist. Indeed, it seems so central to their identity - they seem to substantially organise their lives around it - that I find it hard to tell the difference between them and religionists.

Certainly one can't distinguish them straightforwardly in terms of 'unbelievers' vs 'believers'. These atheists are believers. They hold very strong religious beliefs - about the existence of God, the divine nature of the universe, the proper interpretation of sacred texts, and so on. The fact that they are all negative in content doesn't mean that they aren't powerful religious beliefs. After all, negative beliefs are central to many religions (e.g. that there is no more than one god, or, in some versions of Buddhism, that there are no gods).

Of course, neo-atheists could respond, with a great deal of justice, that they are forced to discuss religion precisely because religious people force their way into public debate so often and so obnoxiously. But this excuse often feels fairly hollow. Bill Maher takes every possible opportunity to take gratuitous swipes at religion, even when it's a subject that he could easily avoid. It's hard to escape the conclusion that his contempt for religion is as much a part of his self-identity as my embrace of religion.

Posted at 08:00 AM in Philosophy, Religion, Science, Society | Permalink