« Are Denominations Passé? | Main | Violent Rebellion and the Christian Right »

God and the God Particle 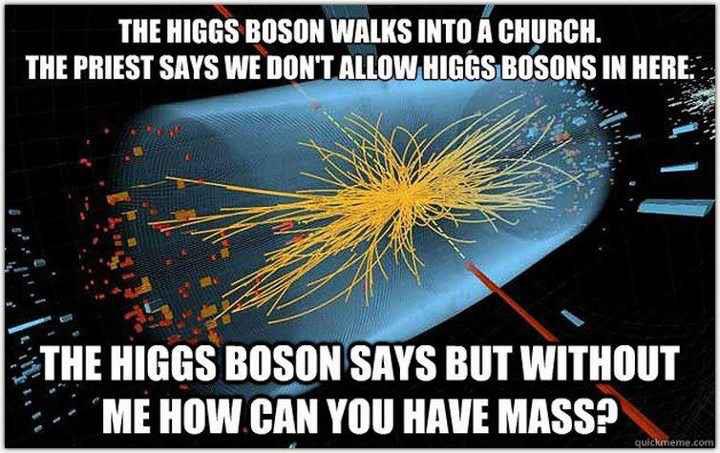 The big science news over the last several days has been the discovery of the Higgs Boson, or at least something that has many of the Characteristics of the Higgs Boson (sometimes called the "God particle," to the annoyance of many scientists and theologians!).

So, if you're not a physicist, the first question you may be asking yourself at this point is "what's a Higgs Boson?" Perhaps this will help:

If you were to say July 4, 2012 was the day the Higgs boson was officially discovered, you wouldn't really be wrong. As CERN Director General Rolf Heuer put it, "As a layman, I think we have it." That's about as unequivocal a statement as you're likely to get from CERN, which is understandably conservative when it comes to announcing possible physics-shattering discoveries. But then, there's a second half to Heuer's quote, one that probably won't get as much attention: "But as a scientist, I have to say, 'What do we have?'" That's a huge question, one that won't be answered today, maybe not this year. Today's announcement is just the beginning of the Higgs story, definitely not the end. (emphasis added)

That hasn't stopped a great deal of speculation on the implications of the Higgs Boson for religion, which is I suppose inevitable when you dub something "The God Particle." I think there is some suggestion that, once the Higgs has been discovered the last nail in the coffin of religion as a rational way of understanding the world will have been placed, but really there is no reason to believe that this is the case.

The central problem from my perspective is in the poor understanding that most people have of what is being discussed when the word "God" is deployed. As Frank Schaeffer noted in the video I posted yesterday, the deepest wells of the theistic tradition, at least in the Christian framework, understand that whatever we may say about God, we are confronted with a reality that is beyond our capacity to comprehend in any kind of adequate way. So any statement about the divine is an attempt to understand an impenetrable mystery.

Now, I think many people, both of a religious and an anti-religious persuasion, think that this is a cop-out. I can remember an old George Carlin routine where he complained that, whenver he asked the local priest some deep theological question about God, or the incarnation, or the Trinity, he'd be met with "It's a mystery!" Which seems like a wholly inadequate answer when coming from someone who's supposed to be in on the mysteries. And of course, many religious people seem to think that believing in something innately mysterious is leaving too many questions about their own state of salvation up for grabs, and so they prefer their religion to come prepackaged with all of the answers included.

But this is a misunderstanding of what is meant by the word "mystery" here. A mystery isn't a puzzle of which we haven't put the pieces together yet, and it's not simply anothe way of saying "I don't know, quit asking so many questions." To say that something is a mystery in the religious sense is to say that we are confronted with a dimension of existence that is in principle beyond our capacity to totally comprehend. We may catch a glimpse of it out of the corner of our eye, or we may come to understand it partially in terms that make some sense to us, but we never get the whole picture, or really much more than the tiniest fragment that can fit into our consciousness. This is a very different thing than simply not knowing something. As in the novel Flatland, it is as though we were a two-dimensional figure trying to explain the concept of three-dimensions to a two-dimensional world.

But as regards the Higgs and God, it should be said that, however much the Higgs winds up being able to tell us about the physical characteristics of the world around us, no one should realistically believe that it will provide all answers or dispell all mysteries. And from a theological perspective, it ought to be made clear that there is no knowledge of the natural world that can stand, in itself as a refutation of the existence of a transcendent and omnipotent God.

This is what I mean when I say we need to use the word "God" properly in this context. Properly understood, God in the theistic tradition (for the most part, there are certainly some exceptions, such as some brands of process thought) is not a being within the universe. Rather, God, understood as creator, is understood to be a) a necessary being and b) therefore necessarily existing outside of the universe of created things. By "necessary being" here, I mean a being whose existence is not contingent or dependent on any other thing. All things within the universe -- from trees to people to duckbilled platypuses to the Higgs boson -- are contingent and dependent. In other words, it is possible for them to not exist. But God refers to a being whose existence is not contingent and (if you buy Anselm's ontological argument) is not capable of not being.

This is not to say that scientific discoveries cannot raise genuine questions about the nature and character of God as implications of their findings. Thus, darwinian evolution raises genuine questions about God's goodness and omnipotence, if in fact nature is "red in tooth and claw" and evolution is an undirected process. Similarly, our knowledge about the size and age of the universe raises substantial questions about divine providence and the place of human beings in God's plan. But in themselves, these issues do not serve as refutations of any particular theological principle, though they do raise substantial theological questions that theologians ought to be both willing and eager to explore as a part of their work.

From that perspective then, the Higgs offers a wealth of new material for theologians to consider, and no doubt as we learn more about how it functions and what we can learn about the nature of the world through our study of it, it will continue to offer new challenges for theologians and philosophers, as well as physicists and cosmologists.

Posted at 10:32 AM in News, Religion, Science | Permalink