Slate today has a re-run of an old column on the way that people view Jesus in the United States. it's well worth reading. Here are a few samples: 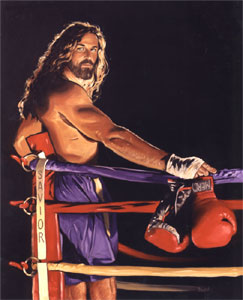 The most popular Jesus of the moment may be the Manly Messiah, a macho savior unbowed by pain or torment. The logo of the Lord's Gym franchises may be the best example: A ripped, muscular Jesus does push-ups while carrying a cross emblazoned with the phrase "the sins of the world" across his back. You get the feeling that bearing the cross is akin to a soldier dropping and giving 20—it's unpleasant but not all that burdensome. This Jesus wouldn't fall three times on the road to Golgotha, and he certainly wouldn't need Simon of Cyrene to help carry the cross.

The Manly Messiah is a man of action, not wordy parables, so the New Testament incident of choice for his partisans is the overturning of the moneychangers' tables in the Temple. A close cousin of the Manly Messiah is the Apocalyptic Jesus of Revelation, what the New York Times on Palm Sunday called the "Warrior Jesus."

In The Passion, Gibson creates still another manly Jesus. By merging the suffering, human Jesus of the Stations of the Cross with a more macho conception of Christ, he's given birth to Rocky Jesus.

Rocky Jesus displays his manliness by enduring unimaginable pain. After taking a fist in the eye early in the film, James Caviezel spends the next two hours looking very much like the Italian Stallion at the end of his bruising matches with Apollo Creed. (Rocky Jesus differs markedly from another boxing Jesus, the unblemished champion Jesus of the painting Undefeated.) Later, after being brutally lashed during the scourging, Gibson's Jesus gathers his strength, pulls himself off the floor, and stands, defiant. He's quickly thrashed into submission again, but the message is clear: Jesus is beaten but not broken. He went the distance. Yo, Mary, I did it.

Of course, liberal conceptions of Jesus don't come off much better:

This is Blue-State Jesus, a pacifist Democrat who drives a hybrid vehicle while advising

people to cheerfully render their taxes unto Caesar. Blue-State Jesus is an antiauthoritarian hippie who judges not lest he be judged. ("Following a set of rules doesn't make us the Father's children," grooved one 1960s San Francisco Bay Area group cited by Prothero. "It's digging on the relationship with Him.") A few years back, People for the Ethical Treatment of Animals launched a Blue-State Jesus campaign when they tried to convince Americans that the Lamb of God didn't eat meat. Blue-State Jesus might be black or gay. He dislikes organized religion. He's more economic radical than sexual conservative. Sure, he opposed divorce and adultery, but didn't he save an adulteress from a stoning? Blue-State Jesus was the driving force behind abolitionism and the civil rights movement but not the pro-life or temperance movements. Heck, he's Party Jesus—he turns water into wine just to keep the night rockin'.

There's nothing new about any of this. The first quest for the historical Jesus reached an ignoble end when Albert Schweitzer pointed out that the face at the bottom of the well is our own, that we see in Jesus simply a reflection of our own needs, wants, and desires. The Jesus of conservative Christianity is an America loving family valuer, while the Jesus of liberation theology is a revolutionary activist.

Underneath it all, it may be that Gary Wills was right in his recent book What Jesus Meant, that ultimately Jesus is unassimilable to the cultural categories that everyone, regardless of their theological or political perspective, wants to put him into. And yet, such an unassimilable Jesus is also a Jesus who cannot relate to our contemporary situation. Perhaps, as a 1st century palestinian Jew, that's precisely the point. But what reason could one possibily give for following such a Jesus? It would make more sense to follow Seneca or Epictetus, who are only as important as their teachings.

Jesus, on the other hand, is important not only for his teachings but for who and  what we believe him to be -- the incarnate Son of God. If he cannot be related to the struggles of our contemporary lives, then that reality doesn't mean very much. 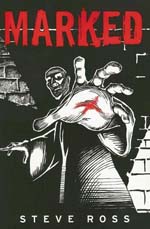 Belief in the living presence of Jesus means that we find ourselves in the awkward position of having to try to interpret the uninterpretable, to understand the mysterious, and the apply the inapplicable. It means we have to procede as though Jesus were comprehensible to us, even if he is not. We have to deal with his hard teachings, even if we cannot understand them. Even, in fact, if we cannot accept them. We cannot simply chuck them in the waste basket because they don't comport with our preferred conception of who Jesus is. We need to learn to get comfortable with being uncomfortable with Jesus.

Among the more compelling recent pictures of Jesus, far more interesting to me than either the macho boxer or the effete talk show host, is the image provided in the graphic novel "Marked." Taking one of the more perplexing gospel accounts, this portrait of Jesus allows him to remain perplexing. At  the same time, he paints his perplexing portrait of Jesus in the midst of a world strikingly similar to our own. Thus, we are denied the easy escape routes of either making Jesus compatible to our world or dismissing him as a relic of the past. He's the living Christ. We can't own him, but we have to deal with him.